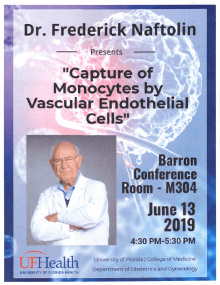 He was President of the Society for Reproductive Investigation (SRI) and of the North American Menopause Society and has received their highest awards for research.  He has been honored by the establishment of a named award for mentorship, given annually by the SRI.  He is a recipient of the Arnaldo Bruno award from the Italian Academy of Science.

He was for 25 years the Director of the Yale Reproductive Biology Program, and for 20 years a Co-PI for the Yale Department of Biology Training Program.  He was for 15 years a co-principal investigator and Head of the Admissions Committee of the NIH Reproductive Scientist Development Program.

He was editor of the Reproductive Biology Division of the American Journal of Zoology, a founding co-editor of Psychoneuroendocrinology, and is Associate Editor of Reproductive Sciences.  He is on the editorial Board of six journals.

Among his scientific contributions is the discovery of estrogen synthetase in the brain, the first observation of the pulsatile nature of gonadotrophin secretion in men and women, the discovery of estrogen-induced synaptic plasticity in the brain, and the presence of a complete renin-angiotensin system in the human ovary.  He and colleagues have defined estrogen-regulation of several enzymes and proteins in normal and cancerous tissues.

His academic interests are multi-organ estrogen actions and teaching/mentorship.